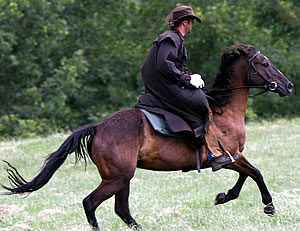 Originally from the South Coast of KwaZulu Natal, Mic first moved to the Drakensberg in 1996. His love-affair with the Berg and horses flourished while he worked as an Honorary Officer for the Natal Parks Board. He did many workshops with the Parks Board, including the Commonsense Approach to Breaking and Training Horses with the Australian horseman, John Pinnell. His innate patience enabled him to excel at horse-training and now has taught the rest of The Northern Horse crew the equine language. After working with the horses in the Parks Board and taking them to the extreme in the mountains he gained a very good understanding of just how capable horses are as nature’s 4x4s. His three month stint in the UK working for top eventer Cressy Clague Reading showed him a whole new world of horsing. His mixed experience of both the structured, human-focused environment of the eventing yard and the “wild” world of horsing in the Berg, gives him a greater appreciation for the entire spectrum of horse management. 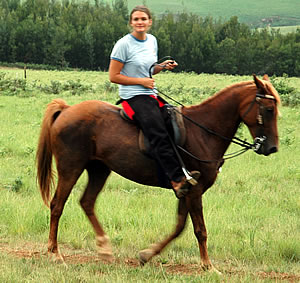 Lindsay has ridden horses since before she can remember! They had simply always been there. As she matured the interest in horses grew and she became more involved in the running of the stables first at the Cavern and then at Montusi. She would lead guests on horse rides from when she was 12, but it was only after she had finished studying and travelling abroad that she returned to the Berg to take full responsibility for the horses. Together, she and Mic took over the horses at Montusi, calling the operation the Northern Horse. They took over at the beginning of November 2007 and have enjoyed a good start to their, in many ways, fledgling business.